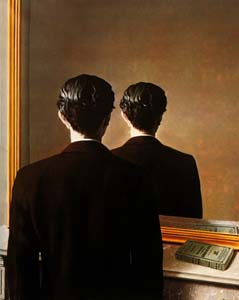 Myself, as seen by René Magritte

To send me a secure message, use the following PGP public key:

On October 15th 1995 at 0930 EDT, armed only with a tent, sleeping bag and a packet of fig newtons, I set out from Annapolis MD for San Diego CA on my trusty touring bike. After just under 36 days and 3100 miles I arrived at my friend Sybil's house, in San Diego at 1500 PST on November 19th.

I traveled on US50,32 and historic US Route 66 to California, then across the desert and mountains to San Diego via various state and county roads. It was a great way to spend five weeks and a unique way to see America! I averaged 90 miles per day, one flat tyre (sic) every 3 days and had to replace one tyre. The weather was generally good, with the occasional drizzly day. A cold snap descended on Texas but didn't give me any trouble. Several very windy days in New Mexico however, did make going quite tough.

I've written a few notes and thoughts on the trip or if you're interested in the gory details, you can read the daily diary.

You can also view a selection of photographs that I took along the way.

Edwin Howard Armstrong,who's engineering genius gave us the regenerative receiver, continuous wave oscillator, and super-heterodyne circuit, committed suicide twenty three years to the day after patenting his most famous invention, wide band frequency modulation.
Although Armstrong the man is gone, his ideas live on - embedded into every piece of communications electronics built today. You need only read the landmark 1936 paper on FM to see what a visionary he was. It has lost no significance in the 60 plus years since it was written.

I've scanned, and converted to PDF (Portable Document Format) Armstrong's paper. Click here to download A Method of Reducing Disturbances in Radio Signaling by a System of Frequency Modulation". It was published in the "Proceedings of the Institute of Radio Engineers",May 1936, Volume 24 No. 5.

Robert Watson-Watt, Arnold Wilkins and others at the National Physical Laboratory developed the first operational radar, the 'Chain Home'. A paper in the GEC Journal of Research Vol. 3 No2 1985 by B. T. Neale describes this in detail. Click here to download "CH - The First Operational Radar".

Just when you thought Oprah was cornering the market.....the National Academy of Television Arts and Sciences has decided to recognize my television engineering work. I shared two 1995 Sports Emmys for Innovative Technical Achievement, ('Point of View' Technology), and Technical Team Remote with my colleagues at Broadcast Sports Technology and ESPN.

.....and in a related item: Wanted to buy - a much larger mantelpiece.

Some of my programming handiwork...

Here's an example of the output of 'az_proj', a freely re-distributable postscript program, capable of drawing "great circle" maps for any point on the earth. It maybe ftp'd from ftp://nic.funet.fi/pub/ham/antenna/azprj104.zip.
and ftp://oak.oakland.edu/pub/hamradio/dos/ham-utils/azprj104.zip.

The program was written by Michael (NV3Z) and Joe (NA3T) and was described in a paper presented at the 1994 Central States VHF conference.

For a tour of it's capabilities visit the azproj home page at http://www.wm7d.net/azproj.shtml.

For more information on az_proj, e-mail Joe at